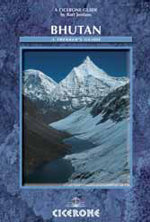 Closed to outsiders for centuries, Bhutan is now allowing access to foreign visitors. But with fewer than 1000 trekkers visiting the country each year and no detailed maps, there is precious little information for trekkers, and the remote kingdom stubbornly retains its air of mystery. However, the author of this guide is uniquely placed to unlock some of Bhutan’s secrets – having lived and worked in the country for more than four years, Bart Jordans has also led treks there since 1994.