An article from our friend Dorji Wangchuk and more

The European Union reassured that their assistance to Bhutan would continue beyond 2020.
This reassurance was made on April 1 after ambassador Kesang Wangdi, who is the foreign affairs ministry’s director general of bilateral division, signed the agreed minutes of the seventh biennial consultation with the European external action service’s deputy managing director for Asia and Pacific, Paola Pampaloni.
The seventh biennial consultation between Bhutan and EU was held in Brussels on November 23 last year.
A press release from the foreign affairs ministry said Bhutan receives additional assistance from other regional and thematic funding mechanisms of the EU in areas such as education, climate change and trade.
“The agreed minutes recognizes the progress made in the implementation of the multi annual indicative programme (MIP) for the period 2014-2020 and reaffirms EU’s continued partnership with Bhutan,” it stated.
It also stated the EU commitment for the current cycle (2014-2020) has been revised to Euro 45.5 million (M) and this represents an increase of 3.5M Euro from the original allocation. “The EU has provided Euro 5M for climate change adaptation and will provide Euro 4 million for a project to promote trade diversification.
The Bhutanese delegation highlighted the priority areas for the 12th Plan and underscored the importance of EU’s engagement with Bhutan’s development plan beyond 2020.
Staff reporter

Bhutanese have adapted technology to our culture and social practices, according to a PhD student of Macau University, Dorji Wangchuk.
He said that in the context of how Bhutanese use social media app, especially WeChat, to practice Buddhism.
Sharing a part of his study on ‘WeChat Spirituality: Buddhism and Social Media in Bhutan’ at the Vajrayana conference on March 30, Dorji Wangchuk said his study is an attempt to answer how the existing culture and spiritual practices are adapting and adopting the technology.
“We already have lots of lamas using WeChat to send mantras and teachings from other side of the globe and from different parts of Bhutan and India,” he said.
More than 50 percent of Bhutanese population use WeChat.
Dorji Wangchuk said there are people, who get Tara empowerment via WeChat from their Lama based in Sikkim, a WeChat group of about 200 members conduct a collective Jamyang Seldep prayer and report to the coordinator in the Wechat where they have recited over 13 million chants and there are Khenpos that bless people and recite mantras through the WeChat.
“I myself had to resort to astrological services from an astrologer who is based in Trashiyangste from Macau after I saw a bad dream of me swept by the river,” he said. “Then he blessed me on the WeChat after conducting Barchay Lamsay and I sent the evidence of the service.”
Dorji Wangchuk said Bhutanese living abroad resort to WeChat while trying to appease the local deities like tsans and gyaps, who become wrathful if regular rituals are not performed.
“WeChat helps us to come to terms with our spiritual and tradition demand besides keeping us connected with our family.”
He said WeChat is also used for social mobilisation in terms of promoting vegetarianism and animal rights, which are aligned with the practice of Mahayana compassion.
“The study also saw that there is a lot of pragmatism in the way we practice now and it is not like before where people accepted and practised Buddhism blindly,’ he said.
Dorji Wangchuk also said technology is a reality and cannot neglect and if there is one thing that is the biggest threat that is technology, which is no more neutral.
“Our spiritual tradition is still alive but strong cultural needs to be instituted in our people. If we want technology to keep reappearing in the use of our spiritual practices then these have to be supplemented with strong cultural foundation.”
He added Vajrayana teaching is timeless and they are not at all diluted in any form, but the medium has kept changing.
Dorji Wangchuk is currently pursuing PhD specialising in socio-linguistics and Buddhist communication.
Yangchen C Rinzin

BBS More students show interest in art of gold and silver smith
Tshering Zam, Trashi Yangtse
Apr 4, 2018
The College of Zorig Chusum or the 13 Arts and Crafts in Trashi Yangtse is seeing an increase in the number of students showing keen interest in learning Tre-zo or the art of gold and silver smith.
Principal Kinley Penjor said not many showed interest in Trezo until last year. “We had only a few of them. Most of the students were interested in other arts such as painting, sculpture, tailoring and embroidery.”
But things are changing now. Until last year, the college saw only four to five students enrolling for the course. This year, however, ten new students signed for Tre-zo classes.
Some of the students are female and they are breaking taboos, myths and stereotypes surrounding the trade and changing attitude towards it.
Sangay Lhamo is one of the female students and she is breaking the traditional notion of the art being a male-only trade.
“The general perception is that the art of smithery is not for the women,” Sangay Lhamo said.
“I volunteered to become a gold and silver smith purely out of my own interest in the art. It is a bit challenging and hard to compete with male students, but it is not impossible to learn the trade.”
Sangay Lhamo added that her parents were not very happy when she told them she wants to learn Tre-zo.
“They said it’s for men and not women. But I proved them wrong. I am in my fourth year. Back in the village, they use the term blacksmith to describe people who practice the trade, but I’ve been trying to explain them about the differences.”
“For me, whether it’s Lhadri or Tre-zo, or for that matter, any other zorig, they are all the same,’ Sangay Thinley, another student said.
As they fine tune their skills, Sangay Lhamo and her peers are bothered about anything but the negative attitude towards the trade. They have long embraced it as their profession and there’s no looking back now.
They have also started receiving orders for smithery even as they learn the art.
They know how to make various gold and silver smithery including ornaments and ritual items. 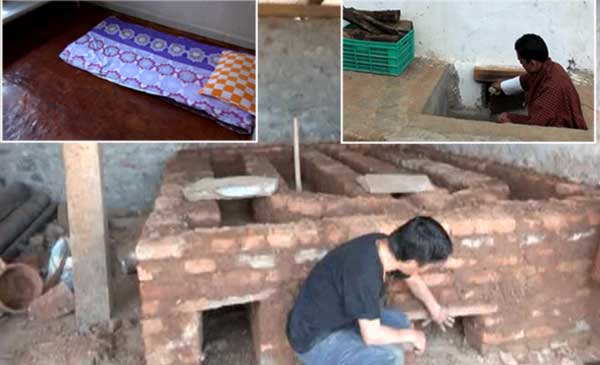 The use of Gudeul, a traditional Korean room heating technology, has been successfully piloted in Gasa.
The system, an under floor heating, is a unique invention of ancient Korea, which uses direct heat transferred from wood smoke to the underside of a thick masonry floor to heat up an entire room.
The pilot room has been setup at the dzongda’s residence.
The room is fully insulated using desho or traditional Bhutanese paper handmade from the bark of the daphne tree, and was implemented by Master Dongha Kim, the number two Gudeul Master in South Korea.
“The reason why this has been used in the olden times and even to this day in Korean is because of its health benefits,” Gasa Dzongda Dorji Dhradhul said.
“It is highly beneficial in healing diseases such as rheumatism, arthritis, UTI, and skin infections.”
A feasibility study conducted for Lunana Gewog by the pilot project showed that use of Gudeul can save over 1.5 million pieces of wood. This amounts to saving an estimated Nu 3 m annually, which otherwise was spent on buying firewood by Lunana Gewog.
The project will now be piloted in Haa.