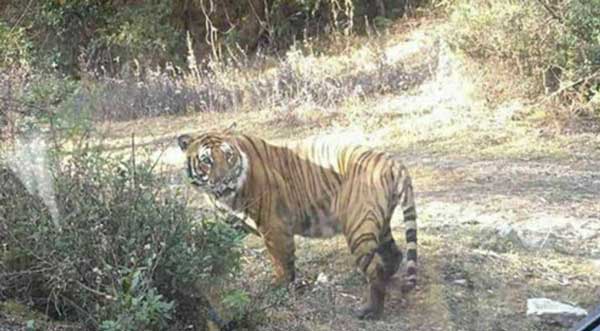 A Royal Bengal Tiger was spotted walking casually at Kabesa in Thimphu at around 4:30AM yesterday.
Pictures and short clips of the tiger walking and drinking water from a stream went viral in social media after it was spotted first by woodcutters around Kabesa.
Thimphu’s chief forestry officer, Gyeltshen Dukpa, said that there was no zoo in the country but Bhutan was like a zoo where wild animals like tigers were found or sighted. “It indicates that wildlife conservation methods in the country are strong, which means we have strong wildlife habitat.”
According to the records, there are 103 tigers in the country today.
Although at this time, in other countries, it may not be normal but it is not unusual too in the country, he said. “In the recent times, tigers have been spotted in places like Motithang and Dochula as well.”
Gyeltshen said that the tiger might not have been able to get food and may have been pushed near settlements and farms in search for food. “As the tiger seems to be old, stronger animals or tigers might have been in the territory where the tiger stayed.”
Forestry officials are monitoring the movement of the tiger.
Officials from Wildlife Conservation Division have confirmed that the tiger was identified as one of the tigers captured on camera during the National Tiger Survey in 2015.
“During the survey, the tiger was captured in the forests between Sinchula, Dochula, and Chamina. These places are the home ranges of the tiger, and the sighting of the tiger in Kabesa does not mean it strayed,” officials said.
Officials said that the tiger is an adult and most likely a female one from the pictures.
The tiger is an apex predator and an umbrella species, which means ensuring their survival allows many species to live and flourish in its large shared habitat.
However, threats to these cats still exist in the form of killing for profit or in retaliation, destruction of habitat for industries or subsistence.
Rinchen Zangmo