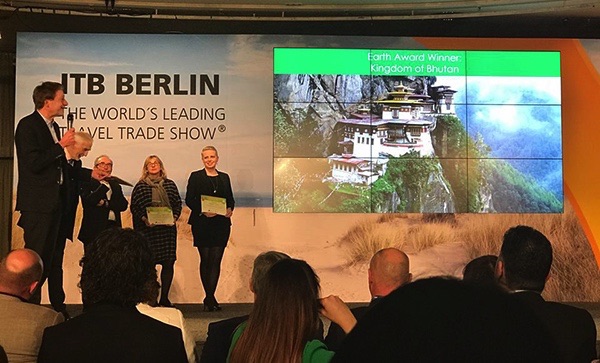 Bhutan wins the World’s Sustainable Destinations’ Earth Award in Berlin, Germany yesterday.
This is the Bhutan’s first win at the International Tourismus- Borsc or ITB Berlin- the world’s leading travel trade show. The award is in recognition of Bhutan’s commitment toward responsible tourism and country’s approach to tourism development and management.
Bhutan was top three finalists along with Spain and Iceland under the Earth Award category. From Bhutan, 28 tour agencies and officials from Tourism Council of Bhutan (TCB) were in attendance at the award ceremony.
Media Spokesperson of TCB, Damcho Rinzin said: “This award is the testimony of our wise and visionary leadership of our beloved monarchs and also our government’s commitments in protecting and conserving environment, and also tourism sector’s efforts towards sustainable tourism.
He added: “It is a true recognition of what we do in Bhutan and we can do a lot of things with this award. So we are very happy with it.”
A jury, representing 12 leading sustainable tourism organisations and networks selected Bhutan from more than 100 top tourism destinations. Green Destinations- an agency recognising destinations around the world for championing sustainability in terms of nature and culture organised the award function.

Monggar DT to propose for restoration of Zhongar Dzong to Culture Dept.

The Monggar Dzongkhag Tshogdu (DT) decided to put up a resolution-outlining the need to restore Zhongar Dzong to its former glory to promote tourism in eastern parts of the country.
Local leaders, in the recent DT session said, restoring the dzong could play a vital role in promoting tourism in eastern dzongkhags, which currently are not tourist hot-spots.
“Right now, we only have Aja Ney as the only cultural site for tourists in Monggar. So, if Zhongar Dzong is renovated, it would attract tourists and perk up local economy,” said Choni Dorji, the Gup of Saling Gewog.
He added: “Minor renovation was carried out during the 11th Five-Year-Plan but it wasn’t up to the expectation of the people in Monggar.” 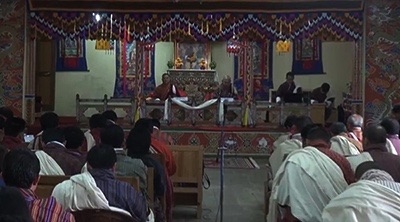 And then was a resounding yes by other members.
“Apart from tourist attraction, the dzong would provide winter residence for Monggar Rabdey if it is renovated,” said Thromde Thuemi, Namgay Dorji.
The Dzongkhag Cultural Officer, Rinzin Peldup said, renovation of dzong was proposed in the 12th Five-Year-Plan but cost estimation is yet to be worked out.
“The Culture Department is busy since there are lots of dzong constructions namely Drukgyal Dzong, Wangdue Phodrang Dzong, Trashigang Dzong and Rigsum Goenpa. During meetings, concerns were raised on Zhongar Dzong, but we have a budget constraint in the dzongkhag and department is also looking similar problem.”
The ruins of Zhongar Dzong are found on the hilltop, overlooking the village of Themnangbi under Monggar Gewog. The dzong was first damaged by a fire and powerful earthquake, some centuries ago.
Locals believe that Gyalpo Karpodung, the then former Monggar Dzongpoen, invited a chief architect named Bala from Paro to construct the dzong during the 17th century. Bala on reaching Saling, did a visual survey of the place and saw a white stone bawl on the small hill, and decided to build the dzong. He named it Zhongkar meaning white bawl. But down the centuries the place came to be known as Zhonghar.
People said, one unique feature about the dzong was that the courtyard was so long that it was used as an archery range in earlier days. 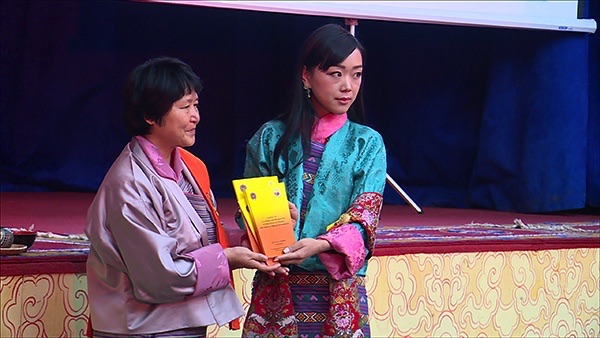 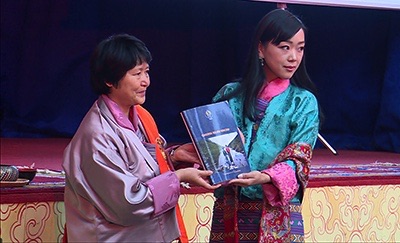 NCWC’s ‘Media Guidelines for Reporting’ is meant to strengthen the role of media in covering issues pertinent to women and children.
The commission’s Chief Programme Officer, Ugyen Tshomo told BBS News: “Actually services are provided but not up the satisfaction and in line with the needs of the women and children. So these guidelines make things crystal clear, meaning specifying role and responsibilities of all the stakeholders.”
RENEW also launched a handbook for its volunteers on consensus building programme. Consensus building programme is a mediation process.
“There is less serious violence like extra marital affairs, there’s a doubt where you cannot produce evidences but you need support. In such cases, the client can come to us and we will see which can go to the formal and which to the informal and we try to help them to see what justice is like,” said Dr. Meenakshi Rai, Director of Community Outreach Department of RENEW.