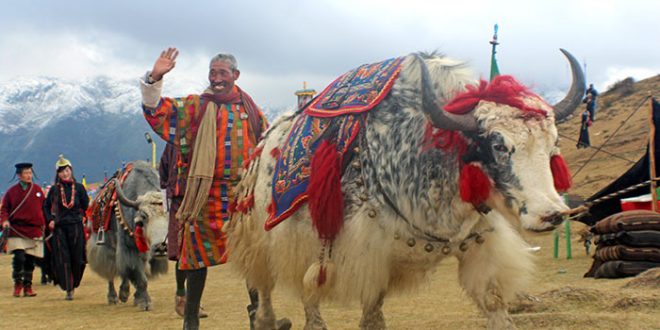 The two-day Royal Highland Festival in Langothang, Laya that happened between October 23 and 24 saw highlanders from nine dzongkhags exhibit their unique traditions, lifestyle, and cultures.
Festival also gave the highlander some ideas of how they could prevent their traditions and cultures from vanishing. There were veterinary clinics to help the locals understand the sustained methods of livestock rearing and the fodder treatment. Langothang was filled with dome and local tents called Bja.
Bja might look hollow and transparent, but it is cold and rain proof.
Sangay Khandu, 19, from Laya, said that he saw the tent for the first time last year during the first Royal Highland Festival. “I heard about it, but had never seen one. It’s very unique.”
With development, some of the Bhutanese communities are losing their unique tradition and culture.
Sangay Khandu owns five horses and the festival is the time for him to make some income. “I make about Nu 4,000 per trip. At other times, my horses are engaged in carrying loads for tourist.”
The festival is a good opportunity for the highlanders to sell their livestock products.
One of the main attractions of this years festival was horse racing. It is the only time where the locals and spectators get to witness a horse race.
Believed to be one of the most ancient sports of the nomadic people, horse racing culture had almost vanished in the highlands.
Dawa Pem, 57, from Chongra said that she had never witnessed a horse race before. “This is my first time. We raise horse only for the porter services. Last year, I made about Nu 150,000 from porter service.”
Laya has a culture of organising local festival called Bongko and Chibee alternatively every year. Unlike the highland festival, though, they do not bring in many visitors.
Dawa Dem said: “The unique lifestyles, culture, and dress are the things that attract outsiders. It is important for us to preserve them. The festival reminds about the importance of preserving our culture.”
Highland festival is the only time when community youth are seen wearing formal dress. The unique dress of the Layap women is almost never worn today.
To make Laya a tourist destination, the first edition the highland festival contributed about Nu 5 million to the community last year.

As part of His Majesty’s land reform exercise, His Majesty The King granted land kidu to 1,157 thram holders from four gewogs in Gasa on October 23. The beneficiaries received a total of 433.58 acres of land as Kidu, as well as excess cost exemption and refund of Nu 3.368 million.
With Gasa, land kidu to resolve accumulated land issues across the country has been granted in 16 dzongkhags.
The land reform exercise began in 2007 with the Royal Command from His Majesty to carry out a National Cadastral Resurvey Programme (NCRP). His Majesty Commanded that, “Land issues must be resolved once and for all – if we do not take it upon ourselves today to carry out a massive and all encompassing exercise, then like in the past, we will only make small improvements on the existing system but leave the biggest problems unresolved burdening the future generations.”
The National Land Commission began this comprehensive survey from June 2008 and completed it by December 2013.
The NCRP brought to light various discrepancies in land use, records and ownership across the country.
The discrepancies are being resolved conclusively with His Majesty’s granting of land Kidu to those people who have been using state land for generations without ownership.
A total of 132,026.738 acres of land have been granted in 156 gewogs to 113,637 beneficiaries in Lhuentse, Bumthang, Mongar, Wangduephodrang, Haa, Dagana, Punakha, Trongsa, Trashigang, Trashiyangtse, Zhemgang, Pemagatshel, Samdrupjongkhar, Thimphu, Chukha, and Gasa since 2010. Beneficiaries have also been granted exemption of excess cost amounting to over Nu 2,201.43 million, in the 16 dzongkhags.
At the ceremony, the dzongkhag and gewog officials, and the people of Gasa offered Mendrel Ku Sung Thuk Ten to His Majesty The King.
His Majesty The King was escorted to the Langothang Plateau, an open-air natural stadium 4,000m metres above sea level, in a picturesque chipdrel, and was welcomed by the highland communities from five dzongkhags, visitors from other parts of the country, and tourists and trekkers.
Langothang was the venue for the 2nd Royal Highland Festival, where over 1,500 men, women, and children gathered to celebrate the rich nomadic culture and lifestyle across the kingdom’ northern belt.
The atmosphere of festivity which is natural to the highlanders, all dressed in a blaze of their unique colours, was highlighted by special features introduced to encourage sportsmanship and stamina, traditional lifestyle and culture, livestock, music and the arts, handicrafts, and the spirit of community living.
This year, on the request of village elders excited by last year’s run, a senior Layap relay was organised with men and women above 60 years from five chiwogs running an entertaining relay race.
A freezing afternoon of sleet and winds did not dampen a highland favourite – the horse race. Sangay Tenzin from Laya outran four other horsemen in the final race. Other sporting events were an inter-chiwog women’s tug-o-war.
The cultural programme included a yak dance and songs and dances that are unique to the highland community.
Dignitaries attending the festival included the ambassador of India to Bhutan, Jaideep Sarkar, UNDP Deputy resident representative, Niamh Collier Smith, expatriates living in Bhutan, and tourists on various treks passing through Laya.