Road widening project on the East-West highway is making travel increasingly difficult. Last week, a dozen public transport operators submitted a petition to the Road Safety and Transport Authority (RSTA) that said they would be compelled to suspend the services until the highway becomes pliable. In fact one of them – Meto Transport – stopped operating on this lateral route since July 11. It is not very difficult to picture how bad and unmotorable the highway has become while we go on scraping the hills.

RSTA yesterday discussed the issue with the Department of Roads. Wherever the talks ended or whatever they centred on, it is important that we recognise the challenges that the transport operators are facing on this national highway. They wouldn’t call the shots just because they feel like it. Their grievances must be viewed as genuine and solutions sought as early as possible. If the services stop operating on this route, untold lives will be affected. Often at such times devouring self-seekers plunder innocent travellers for short-term gains. On this road, even as we speak, it is happening.

The widening work on this highway that should have already been completed has taken some more time. We are told the deadline now has been pushed to early 2018. When we last checked, the progress report told us that almost 75 percent of the widening project was completed by March 2016. Then until now, the progress should have been impeccable. What we have, though, is a sorry state of affairs. Of course we ought to make some allowance for the destructive power of monsoon. Even so, the condition of the highway should not be so bad that the transport operators are now giving us an ultimatum.

As the Prime Minister remarked after his airborne visit to the highway last year, the widening of the highway is a valuable investment because it has the potential to become the country’s lifeline. It, the highway, will be the “pride of our people,” he said. Well, it doesn’t look like anything we can be proud of. Not yet, at least. Efforts must be made to make the highway pliable so that the public transport operators do not suspend their service. Otherwise, the “lifeline” of half the nation’s people will be severed. And that’s not a good thing to happen.

This is an issue that needs to be settled as straightaway as possible. We cannot allow foot-dragging – at all.

About six public transport operators submitted a signed petition last week to the Road Safety and Transport Authority (RSTA) requesting the authority to improve the condition of the East-West highway.

The petition stated that the road condition has damaged the buses plying on it incurring loss to the operators of the transport services.

He added that the public would blame the bus operators if the bus meets with accidents while plying on such roads. “Even if we refuse to provide service, the blame will be on us,” he said. “We are not asking for a blacktopped road but at least the road must be in condition for the bus to ply.”

Karma Pemba said that Department of Roads (DoR) has instructed its field officers to help clear the roads. “We have requested them to improve the roads by filling the potholes with pebbles and by clearing the slides on the roads,” he said.

He said that the site coordination among the DoR, RSTA, traffic police and dzongkhag officials must be improved to update travellers and operators to function on schedule.

Some buses of Meto Transport remain unavailable for service because of the unavailability of spare parts.

Karma Pemba said that the suppliers have been asked to keep spare parts available for the vehicles.

He said that public transport operators are not allowed to suspend services on their will. The RSTA should be informed of the reasons and should receive approval from the authority.

In the wake of increasing vehicle import and associated impact on the economy and the environment, the Royal Monetary Authority (RMA) has tightened access to credit for purchase of vehicles.

The central bank on August 1 issued a circular to all financial institutions informing them about the loan to value ratio on motor vehicle or transport loan being revised from 50 percent to 30 percent with immediate effect.

This means that financial institutions will only provide 30 percent of the vehicle cost as loan and the loan applicant will have to inject the remaining 70 percent as equity.

RMA governor Dasho Penjore said that the board decided to change this clause of the guideline on motor vehicle loan because of the huge surge in vehicle import and corresponding increase in import of fuel and spare parts besides the traffic congestion.

He added that the application of GST in India would exempt duties on import of cars to Bhutan. This would reduce the cost of Indian made cars by upto 20 percent. “This may increase the car imports to Bhutan, further worsening our INR reserve and trade deficit,” he said.

“Considering these impacts, there is a call for both monetary and fiscal measures to contain import of cars,” Dasho Penjore said. “The measures may change if conditions change.”

While the RMA has adopted the monetary measure within its purview, the fiscal measures rest with government. “Time has come to seriously contemplate on further improving the public transport system, which I feel the government will consider soon,” he added. 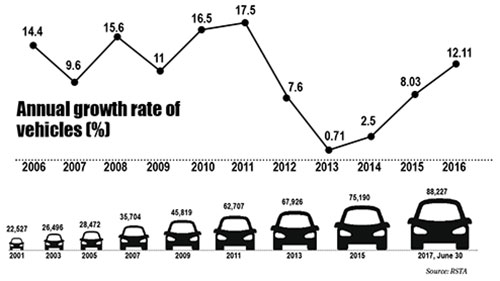 Records with the Road Safety and Transport Authority show that the country bought about 24 new vehicles every day in 2016. Almost half of these vehicles imported are plying the streets of Thimphu.

Based on the figures, about every seven people in the country owns a car while in Thimphu, every two persons own a vehicle. Should the average length of a car be assumed at three meters, all registered cars in Thimphu when lined up one after another would reach Bumthang, covering more than 260 km of road.

As of June 30 this year, there are 88,227 vehicles in the country. This means that 3,930 vehicles were bought in the first six months of 2017, indicating a purchase of 21 vehicles every day.

The direct impact is already pinching civil servants like Ugyen Dorji. “It’s the traffic congestion,” he said. It takes almost an hour to reach his office in Tashichhodzong from Olakha. This distance is less than 10kms. “If I start early it takes only 20 minutes but if I start at 8:30am I’ll be late to work by an hour,” he said. It takes an hour to drive from Paro to Thimphu (56 KM).

Tshering Wangchuk a corporate employee also said that many drivers lose their temperament in the congestion and often land up quarreling with fellow drivers and policemen. “The situation will get worse if import of cars is to continue at this rate.”

While an efficient public transport is perceived to be an effective solution, a private employee, Sonam Dorji, who regularly uses city buses and taxis claim that the situation is no different. “Even city buses are trapped in the congestion and there is no special lane or preferences for public transport,” he said.

Thimphu Thrompon Kinlay Dorji said lowering the vehicle loan amount by RMA is a timely intervention and this would help control further traffic congestion in the city.

“Given the present situation, traffic congestion in the city is worsening and Thromde is handicapped,” he said citing lack of budget for road widening. “Cars are parked on the roads due to limited parking space.”

Increasing number of vehicle is also directly proportional to increasing import of petroleum products, according to trade statistics. In 2016, Diesel was the top import item valued at Nu 5.77B. Petrol and diesel combined amounted to Nu 7.53B in fuel expenses last year alone and should the loan repayment be excluded, the entire revenue from hydropower is eroded in importing fuel.

The government has already revised the sales tax and customs duty on import of vehicles and lifted the ban. But the revision helped little to achieve the desired outcome of curbing import.

On the flipside, the government has lost Nu 676M in 2015 from tax exemptions on import of vehicle for the government, corporate bodies, projects, tourism sector and by granting quota to senior civil servants. There are also various fiscal invectives pertaining to the transport sector, encouraging more purchases.

As of April this year, financial institutions in the country have provided more than Nu 4.8B of transport loan of the total Nu 94B loan granted in the domestic market.

Some bankers are skeptical that this change in loan to value ratio would prove effective without a fiscal measure. For instance, people avail other loan products and use it to purchase vehicles.